Oscars 2019: Fashion Round Up Of The Academy Awards – Results Are Stunning And Outrageous

The actor Billy Porter was not the first person on the red carpet at the 91st Academy Awards, but he was the fashion explosion that marked the beginning of everything. He arrived wearing a black velvet tuxedo-ballgown designed by Christian Siriano. The dress was purposefully dramatic and attention-grabbing. The lush bodice had satin lapels and a corset-like cummerbund. The skirt was floor-length and full. It was accessorized with a white shirt with ruffled cuffs and a generously sized bow tie. Its extravagance and theatricality called to mind the Bob Mackie-created costume for Carol Burnett’s famousWent With the Wind sketch. 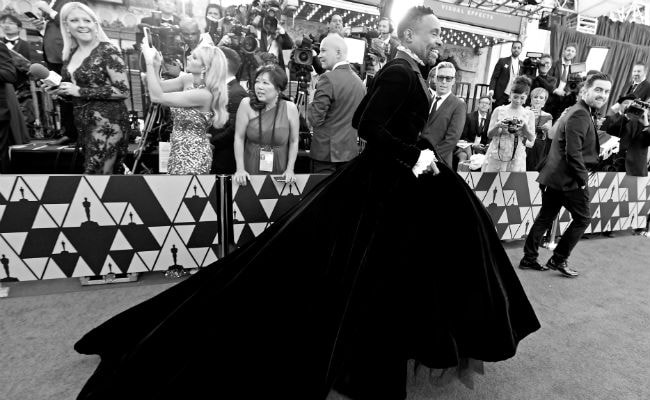 The gown celebrated individuality and upended both gender rules and social norms. It was also extraordinarily well-tailored, which was no easy feat since it was an aesthetic splicing of a Prince Charming tuxedo with a princess gown. Did it flatter Porter – a man with a dancer’s lean and toned physique? Well, no. He was practically drowned by it. But that didn’t matter. Porter looked utterly delighted by it.

The red carpet as a popular culture phenomenon has been in the throes of upheaval in the past few years with hashtag campaigns shaming armchair critics and aficionados of style for caring about the parade of tulle and satin that represents the best that the international fashion industry has to offer. So many celebrities serve as formal brand ambassadors for design houses. They all use fashion as a way of buffing their public image or changing the trajectory of their career. Many of them simply enjoy the creativity of fashion. But social justice issues and politics connected to the (hash) MeToo movement had them swaddling themselves in basic black.

This Oscars red carpet represented fashion unleashed. Indeed, it felt a bit like the red carpet from decades ago, before stylists arrived with their eye for detail and their impeccable good taste to convince actors that ideas such as bicycle shorts and backward blazers were not delightfully quirky but just startlingly bad.

Sunday evening brought glorious fashion – dresses that fit like a glove, tuxedos that made men look dashing and women look sexy or distinctive. There were also eruptions of ruffles, a bright red tuxedo that didn’t quite fit and ensembles that looked like they had been thrown together at the last minute – quite possibly in the dark.

But even the ensembles that were aesthetically challenging had purpose and personality. They only looked willy-nilly; they had intent. Filmmaker Spike Lee at first glance looked a bit like he’d dip-dyed himself in a vat of purple except for his custom golden Air Jordans. There was a point to his purple madness – honoring a black designer and a black musician. His grape-Kool-Aid-colored tuxedo was designed by Ozwald Boateng, the British designer of Ghanaian descent who came to fame when he brought his brand of traditional tailoring to the much-revered Savile Row. Lee was also wearing a gold medallion in honor of Prince, whose rendition of “Mary Don’t You Weep” was featured in his Oscar-nominated film BlacKkKlansman. 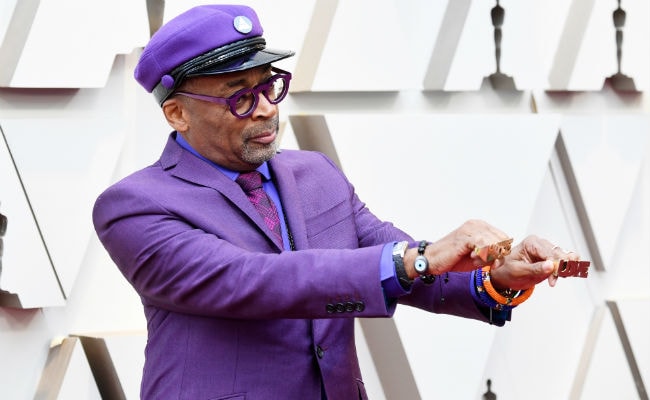 Laura Harrier, one of the stars of BlacKkKlansman, wore a custom-made, pale blue Louis Vuitton gown embellished with glass beads and crystal shards that was notable for being crafted from sustainable materials as part of a “green initiative” for the red carpet.

If there was any red carpet trend on the part of women, it was the choice of bold pink – power pink.

The list of actresses wearing shades of raspberry and fuchsia was long. And their gowns ranged from pure froth to regal grandeur. Green Book‘s Linda Cardellini wore Schiaparelli pink in a ruffled gown that showed off her legs in front and flowed into a train in the rear. Helen Mirren also wore Schiaparelli, but her delicate gown was layer upon layer of translucent pink silk. 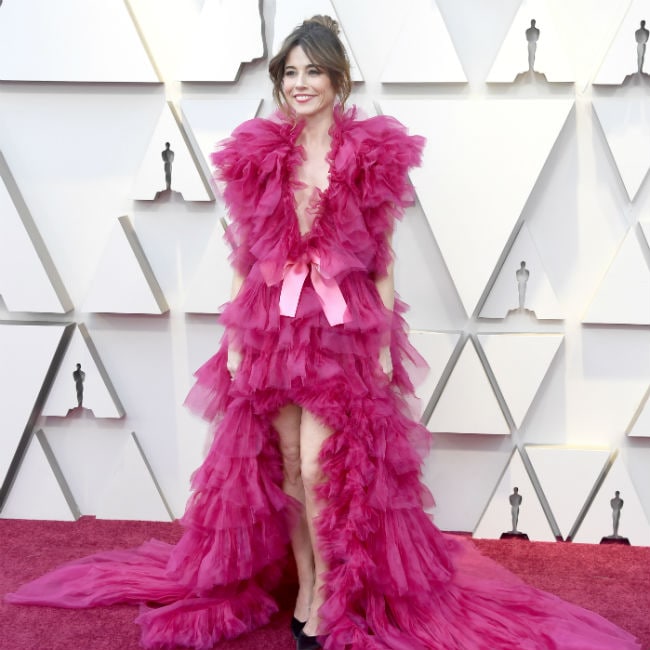 Awkwafina wore an iridescent lilac trouser suit with a pussy bow blouse by the Canadian team behind DSquared2. Angela Bassett chose an asymmetrical gown in fuchsia by Reem Acra, and Kacey Musgraves floated in pale pink ruffles from Giambattista Valli.

But the star of power pink brigade was Gemma Chan in a flowing cherry blossom pink gown by Valentino. The sleeveless dress with its high neckline was one of the most demure dresses of the evening. It eschewed high slits and plunging necklines. It revealed no lower back cleavage. It was gloriously voluminous. And it had the ease of pockets. But it was mesmerizing.

It wasn’t a coordinated statement of political might. It wasn’t an organized pronouncement about some social issue. But in that traditionally feminine hue, there was a declaration of power and of the joy that can be derived from the sheer beauty of a designer’s handiwork. If Porter was having his one-night-only personal fashion moment, women were reveling in their long-standing relationship to fashion. As they stood on the red carpet and talked about the thrill of being nominated or presenting or simply being in the room, they also talked about their dress and about who made it. And they seemed perfectly delighted to have that conversation.

And it wasn’t just the women. The men were talking about their clothes, too, because their ensembles were worth discussing. Lee’s was weighed down with symbolism. Stephan James wore a showstopping red velvet tuxedo by Etro that would have been even more dashing had the sleeves of his jacket been a tad longer, his bow tie a bit smaller and the collar of his shirt wide enough to camouflage the metal hardware on that tie. But no matter. He gave the red carpet a good effort.

Bradley Cooper was looking his movie star best in Tom Ford. Henry Golding was fully committed to the formality of the occasion in white tie from Ralph Lauren. And Nicholas Hoult from The Favourite brought a bit of avant-garde flair to the red carpet with a Dior Homme tuxedo that had a cummerbund-sash-train extravaganza swirling around his body like some sort of military flourish. 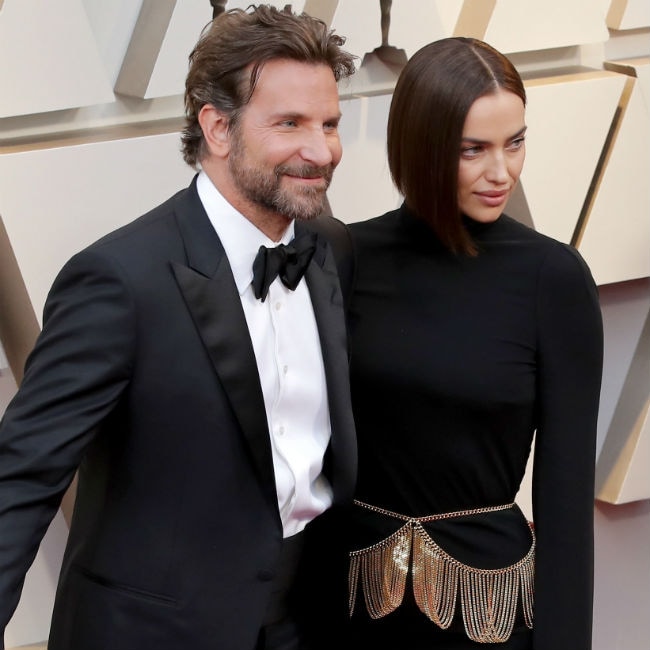 Women riffed on the tuxedo, too. Amy Poehler channeled Johnny Cash in her black-on-black tuxedo from Alberta Ferretti, and Melissa McCarthy wore black trousers and a white satin caped top from Brandon Maxwell. McCarthy’s ensemble was elegant in its restraint and the styling of it served as a master class in the importance of underpinnings and the value of a professional steamer. Not a line anywhere on that satin. Not a ripple. Not a divot.

The queens of the red carpet – Charlize Theron, Jennifer Lopez, Lady Gaga – acquitted themselves well. Theron, who stars in commercials for Dior, wore a floor-length Dior dress in the brand’s signature blue that was prim, with a completely covered front and almost completely bare back. Lopez wore a Tom Ford gown that resembled a mirror that had been cracked into bits and draped around her body. It looked stunningly uncomfortable – a dress best left to the professionals. And Lady Gaga, who has made some of the most dramatic fashion choices this awards season, chose a stark black Alexander McQueen gown for the Oscars. All of the drama was in the dress’s silhouette, which angled outward at the hips like 21st century panniers, and the 128.54-carat Tiffany diamond hanging around her neck like a glittering boulder.