NEW DELHI:Miley Cyrus and Priyanka Chopra’sInstagram conversation have once again put them on the list of trends. Miley’s last few Instagram posts opened the time travel portal to the good ol’ Disney days and her colleagues (ex-boyfriend Nick Jonas among them) and fans thought that was totally lit. TheWrecking Ball hitmaker posted a screenshot of Nick Jonas’ comment saying: “That moment when even your ex knows your socials have been on fire.” Nick’s actress wife Priyanka Chopra seconded him and wrote in the comments thread: “Lol. Hahahaha…. Hubby is right. These posts are lit.”

Miley Cyrus and Nick Jonas dated for almost a year from 2006 to 2007 when they both were top Disney stars. Miley’s 7 Things is said to be about her relationship with Nick while the Jonas Brothers’ track Wedding Bells is reportedly about the Hannah Montana star. Nick Jonas also dated former Disney star Selena Gomez, who also features in one of Miley’s videos, which she captioned: “Your generation = 7 Rings MY generation = 7 Things… Simpler times.”

And this is what Priyanka Chopra wrote: 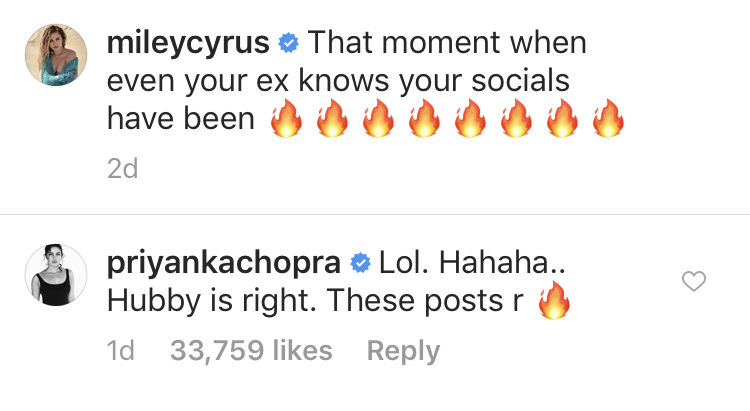 Miley Cyrus and Priyanka Chopra last trended when the former complimented the 36-year-old actress for her Oscars after-party look. Hollywood’s renowned make-up artist Pati Prema Dubroff shared details of Priyanka’s look on her Instagram and in one of the photos, Miley wrote: “Pretty! Love.”

Before that, Miley and Priyanka walked the red carpet at the world premiere of Isn’t It Romantic?, in which Priyanka co-stars with Miley’s actor husband Liam Hemsworth. Miley represented Liam, who stayed back as he was recuperating. Priyanka’s plus one to the premiere was Nick Jonas.

Nick Jonas married Priyanka Chopra in December 2018 after dating for a few months.